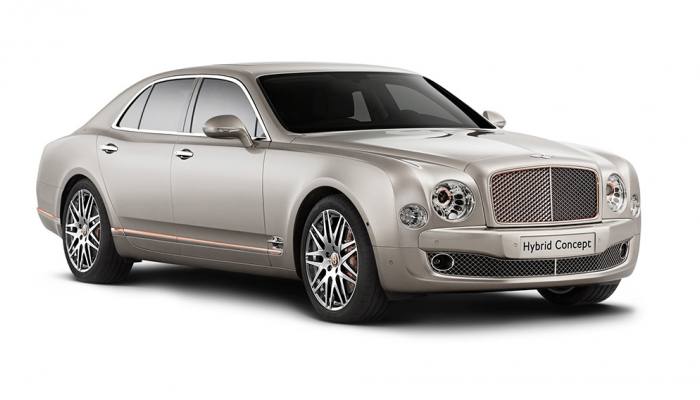 The Bentley Hybrid Concept took center stage at this year’s Beijing auto show. Bentley’s first foray into hybrid propulsion, the plug-in motor debuted at the show in the body of the British automaker’s flagship Mulsanne, to show that hybrid technology can enhance even the pinnacle of luxury and performance. The car’s exterior accentuated classic Bentley elements such as the brand’s trademarked headlamps, radiator shell, and exterior lines. These accents continued in the cabin, with copper-colored inserts and cross‑stitching paired with handcrafted veneers and cabin instruments.

While this hybrid version of the Mulsanne was merely a show car, the same plug-in application will make its debut in the anticipated (albeit controversial) Bentley SUV, which is scheduled to hit roads in 2017. The forthcoming SUV’s hybrid system will boost power by 25 percent while reducing emissions by 70 percent. Bentley says that its hybrid SUV will be capable of driving at least 30 miles solely on electric power, allowing for emissions-free city driving with enhanced combustion-engine performance on the open road. By the end of the decade, Bentley plans on incorporating hybrid power trains into 90 percent of its production models. Pricing for the hybrid Bentley SUV is not yet available. (www.bentleymotors.com)