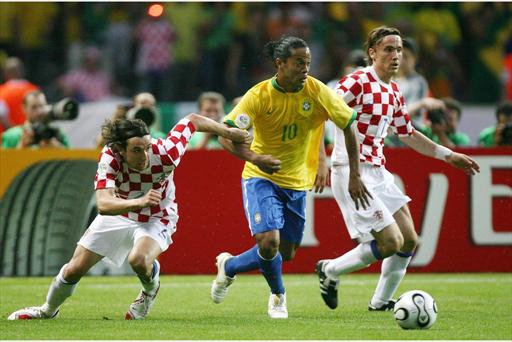 Brazil’s chances of winning the World Cup are slim in my opinion, after their performance against Croatia today. Well may be if they bring the Japanese referee  along with them at every game their odds would be increased. Such one sided bias in decision making hasn’t been seen since England’s goal was disallowed in   World Cup 2006 against their formidable enemy Germany.

Brazil, heavily  favored to take Croatia by storm were nonchantly quiet in the opening minutes of the game in Sao Paulo. Most of the opportunities came from Brazilian mistakes. Just 10 minutes in a cross from the wing was lunged at by Croatian forwards and missed  until Marcelo, Brazil’s defender got his foot and tiptoed  it into the net passed his own goalkeeper. Croatia 1 Brazil 0.  The 65000 fans silenced to a breath.

The score held till half time and then it seemed the referee was more interested in the antics of the Brazilian players who were dancing, prancing, producing acrobatic moves to deflect attention from the reality of Brazil’s attack being broken up. After some questionable decisions the ball was disputed in the Croatia penalty area when Dejan Lovren put his hands around the waist of Fred who performed spectacularly with a leaping backward somersault – the referee just a few feet away – to earn the reward of a penalty.  Even Stipe Pletikosa’s  out stretched fingers diving to his right were not strong enough to stop it entering the net, 2-1 for Brazil.

Brazil were now on top and playing some skilful passing, I suppose if you had to award a game for possession then Brazil at over 60% were definitely the top contenders, but soccer is decided by goals and though Croatia during the last 20 minutes put on some spirited attacks it seems their firing boots were not accurate enough. Jomez Brazil’s goalkeeper was called upon to make some fine saves including a full length dive to defend the right goal post and what looked like a certain equalizer. But Croatia didn’t have the artistry of defensive spills that the Brazilian stars possessed.

With just 10 minutes? left before the final whistle  a midfield tackle by Brazil   looked like a dangerous tackle but the ref  let it go and the ball arrived at Fed’s feet to drive it past Plitikosa and make Brazil a 3-1 winner. The third goal save for the aggravated foul by Brazil was at least their most spirited move. All in all they didn’t execute like a World Cup winning team. Perhaps hometown politics is getting the best of the squad?