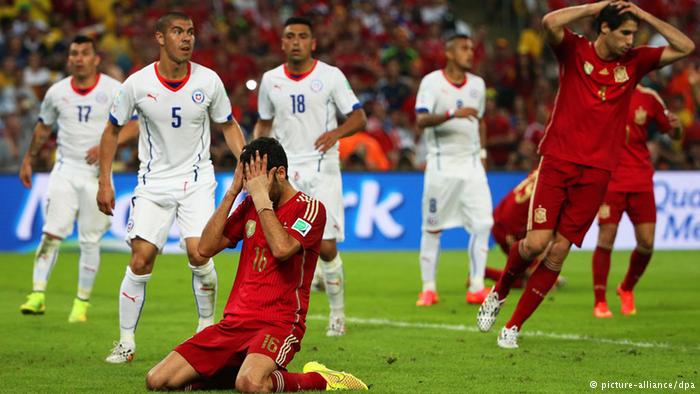 Spain the 2010 FIFA cup holders were taken apart by an energetic Chilean team that took the chances coming to them. Chile following their victory against Australia were matched  in their second game against Spain. Spain already down from their first game against Holland had to draw at least to survive. However, in the 20th minute Chile’s Sanchez  pushed the ball from the right to Aranguiz  who avoided a tackle and placed a perfect center to unmarked Eduardo Vargas. Holding the ball against a diving goalkeeper Vargas pushes it into the back of the net. Chile 1 Spain 0.

Spain struggled and made some concerted efforts however in the 43rd minute Alexis Sanchez took a magnificent free kick that flew to the left side of the goal, Iker Casillus , the Spanish goalkeeper fisted it away unfortunately right to the feet of Chile’s marksman, Charles Aranguiz. He returned high and straight back into the left corner of the goal. Casillus had no chance of moving to his right side now almost blinded by the throng of defenders and Chilean forwards, Chile 2 Spain 0.

In the second half Spain made some excellent moves and appeared to be dominating in the passing game. In the 48th minute Diego Costa’s shot was blocked – a gift to close the gap with only the goalkeeper to beat. Then again in the 52nd minute a free kick taken 5 yards outside the penalty area by Costa cleared to the right and the resulting cross was flicked wide by Sergio Busquets from an open goal situation. Spain will regret these missed shots and coach Vincente del Bosque covered his face in dismay.

Torres came on in the 60th minute to replace Costa and for a while raised the energy level of the Spanish team, but it seemed another error by Bosque to choose a fading star over some eager youngsters. In the 80th minute and for 5 long minutes Spain produced an onslaught on the Chilean goal. They follow two other World Cup holders not to make it past the group stage. Spain however, goalless and winless are ousted out of the World Cup. Bosque is unlikely to be coaching again for his country and also may find himself on the unemployment list if Barcelona decides to let him go.