In a league of its own, Sunrays has staterooms for 22, a separate owner’s deck and even a disco ball for clubbing. This Oceanco has traveled the world as a charter yacht.

Some yachts are built to break the rules, and the 279-foot Sunrays is one of them. Sleeping 22 guests when the standard is 12, it’s a full custom design built on Oceanco’s proven Y700 platform. The fifth hull in the series, its sisterships include Steven Spielberg’s Seven Seas and the award-winning Alfa Nero.

Another design quirk is the three suites on the owner’s deck, which takes in the main suite with private terrace, an adjoining VIP with sea balcony and the owner’s office that transforms into a third cabin, again with a sea balcony. Multiple pullman berths are also available and a second VIP is located on the lower deck.

“The flexible owner’s deck layout means the family can travel with guests and still have a dedicated family deck, with their guests all comfortably accommodated on the main deck,” Alex Busher, sales broker at Edmiston told Robb Report. “With a private owner’s terrace that can’t be seen, even from the bridge, and a private jacuzzi and barbecue, it’s a sanctuary for the family.”

The yacht was built for a family who had chartered for many years, so they came with a different idea of interior design. Their marching orders: Supersize the social and sleeping areas.

This Oceanco was conceived with entertainment in mind, and the bridge deck is largely given over to a spa area with a dedicated lounge and large aft deck, with one of three onboard Jacuzzis. A sauna, steam room, hammam, cinema and treatment rooms go somewhere towards making up for the lack of a beach club facility, as does the “insane Ibiza nightclub setup,” with sound system and smoke machine.

“Sunrays was built pre-beach club era,” says Busher. “There is water access at the stern, and the main deck aft is a large sociable area with a big jacuzzi, but it’s not at the water level like most beach clubs.”

Completed in 2010 for experienced charterers but first-time owners, Sunrays was one of the largest Oceanco deliveries at that time. It was also one of the first yachts to feature fold-down balconies. Its custom green exterior by the late Norwegian designer Björn Johansson gives it curb appeal. Its matching EC145 helicopter–for sale for an additional $3.95 million–means no location is off limits. 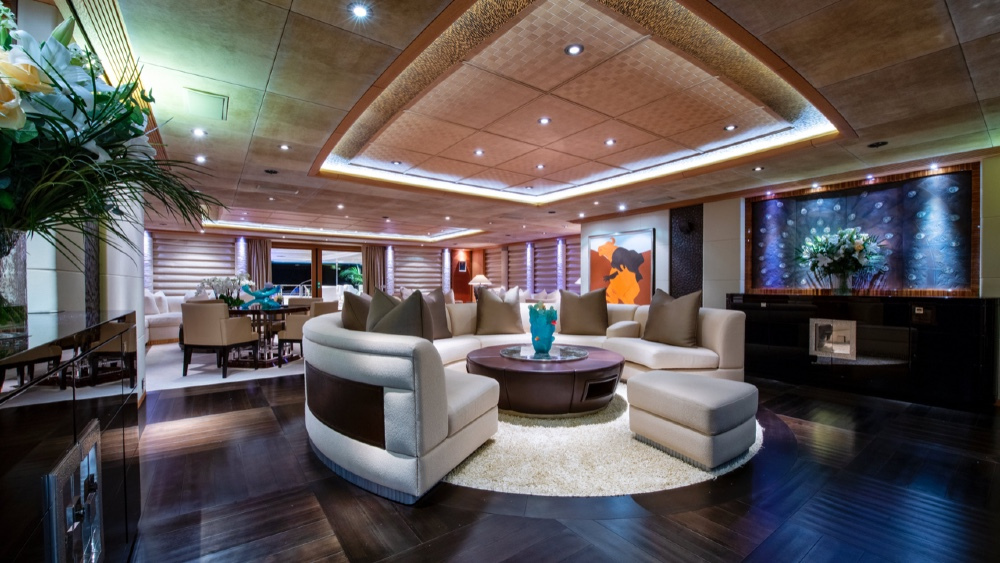 The main-deck salon is just one of many gathering points. The owner’s deck has its own salon, study and outside patios for socializing and dining.

Sunrays remained in private use for the first seven years, before the owners put it on the charter market in 2018 following a significant refit. The original Terence Disdale beach-themed interior remains, with a few soft furnishing upgrades.

New features include a semi-enclosed, air-conditioned gym on the sprawling sun deck. A central elevator gives accessibility to all six decks and a collection of tenders and toys, including a 21-foot chase boat, make exploration easy.

“She does between six to eight weeks charter a year, which actually covers its overheads,” says Busher. “The owners are commercially-minded and like to make sure everything works well, and the 45 rotational crew are incredibly hard-working. The boat never sits still.”

Even the Sunrays name shows the owners wanted the yacht designed around living the good life. On the aft deck, a disco ball lights up the jacuzzi.

Chartering for $1.1 million per week, Sunrays is no stranger to the Indian Ocean, Caribbean and Mediterranean cruising grounds. “She’s been to Thailand, the Maldives and was out for the MBS Red Sea week just before the 2019 winter,” says Busher. “When she cruises the Bahamas the color of her aqua hull is the same as the shallow water. It’s beautiful.”

Sunrays is listed for sale with Edmiston for $145 million. Check out the many other areas of the yacht. 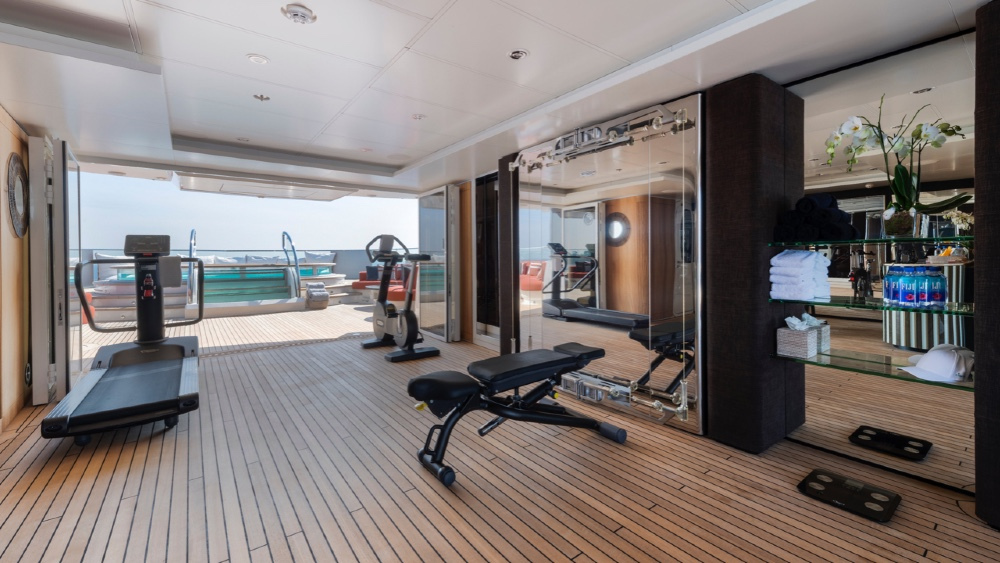 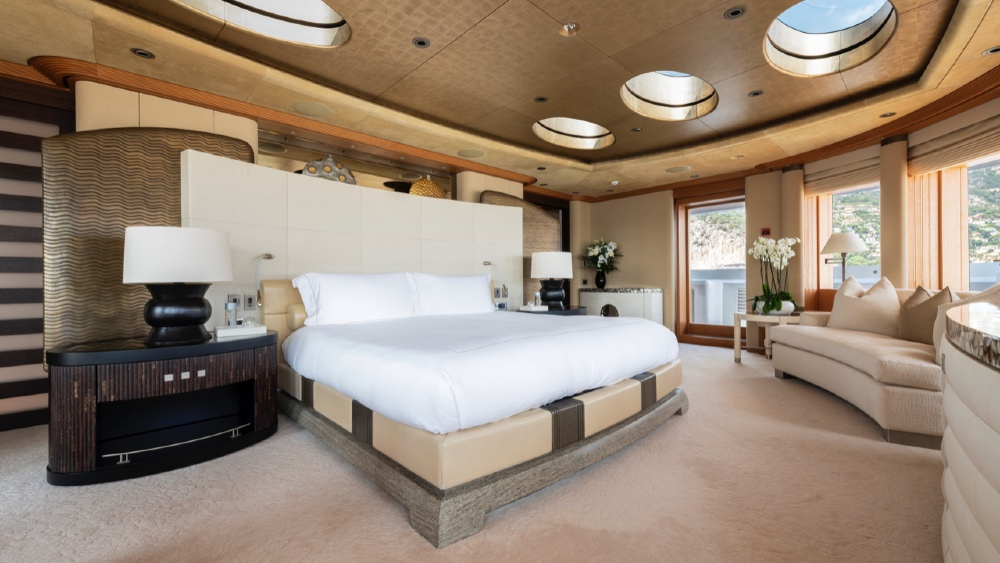 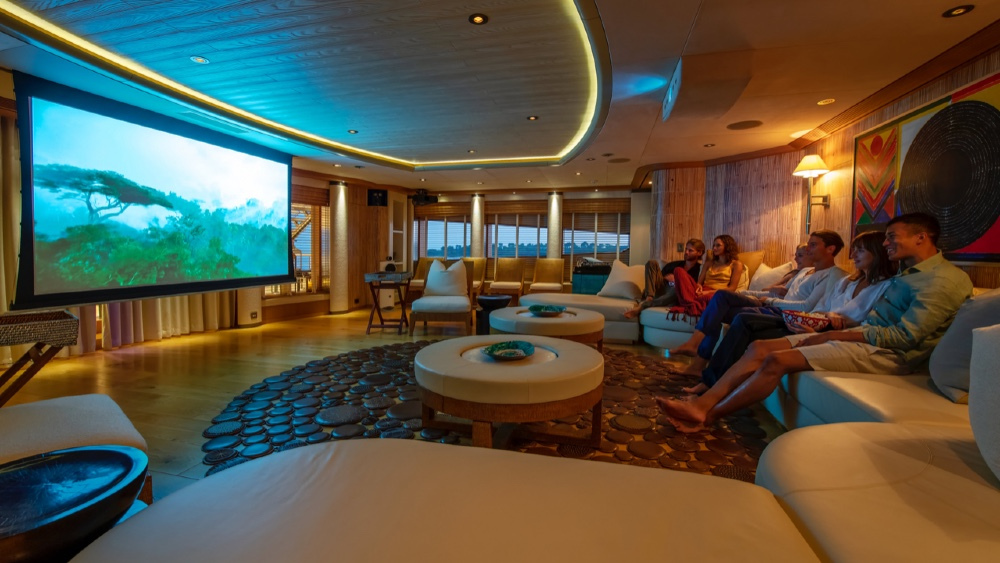 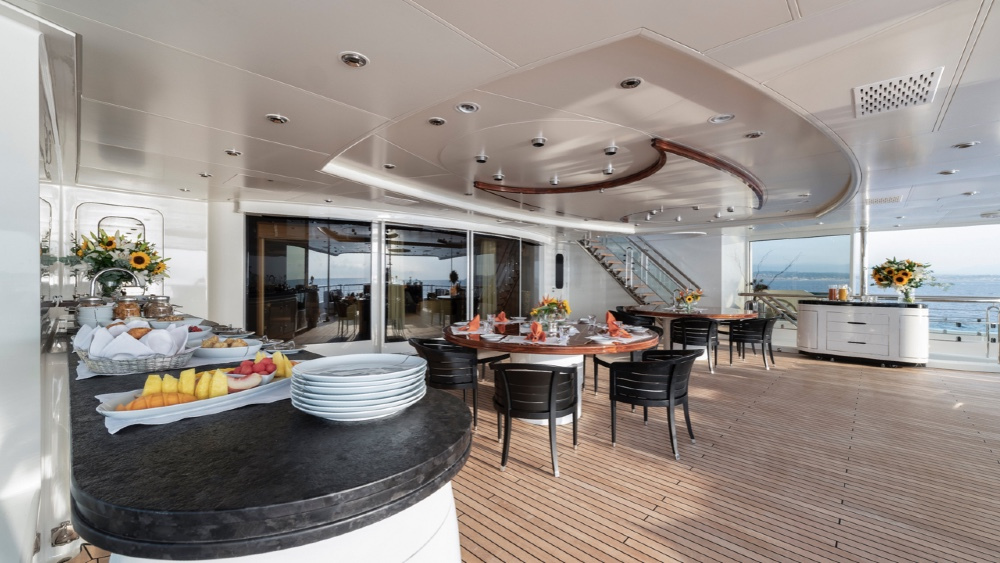 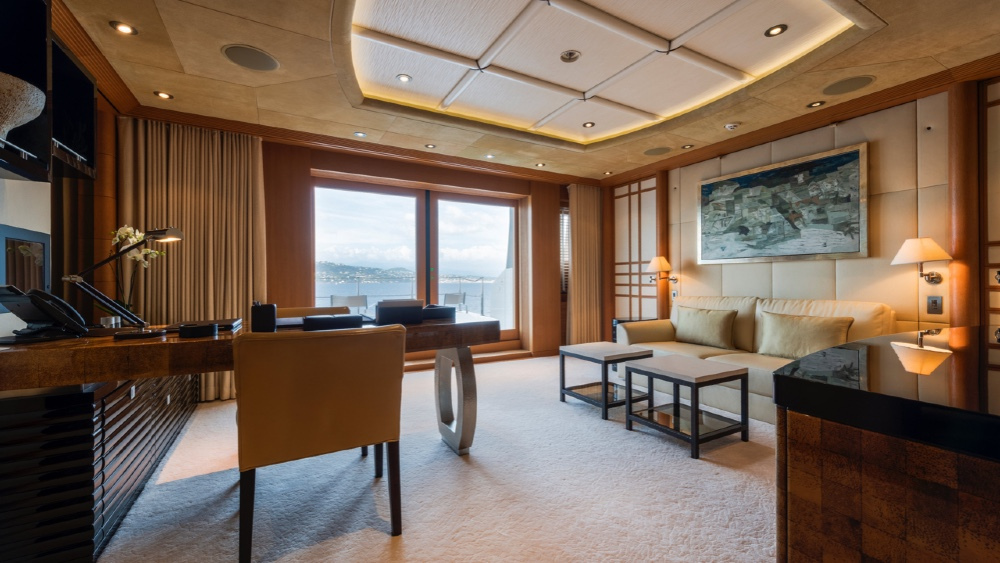 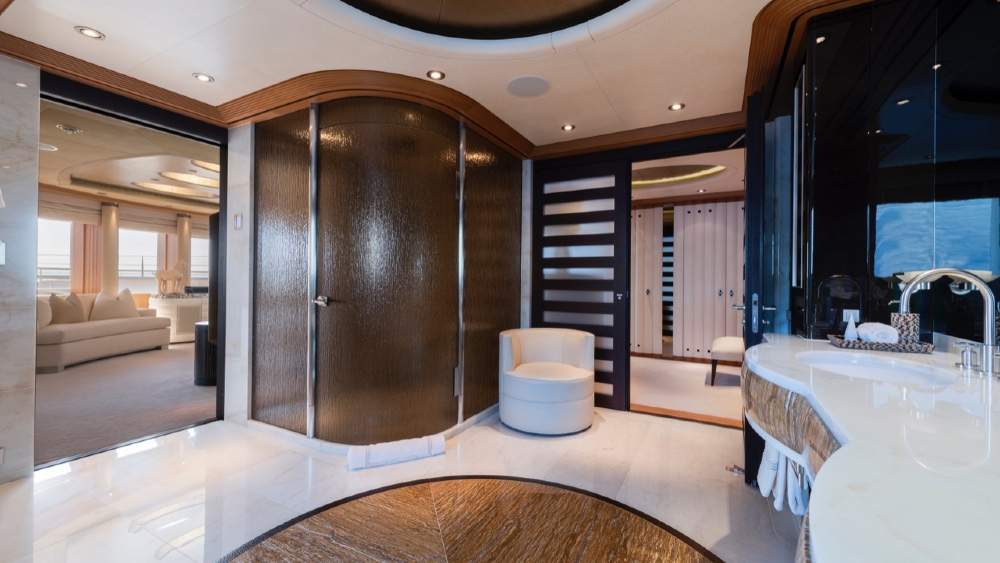 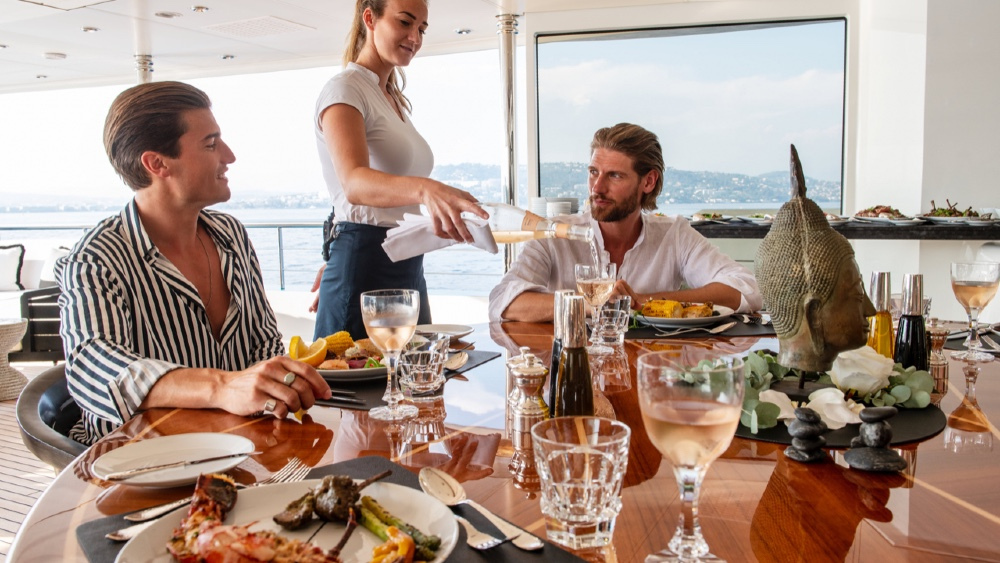 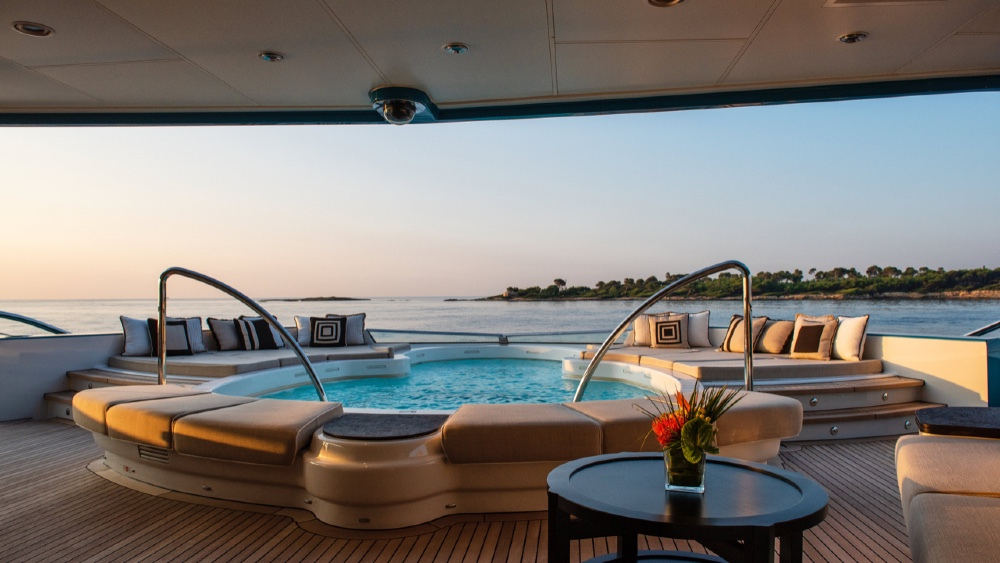 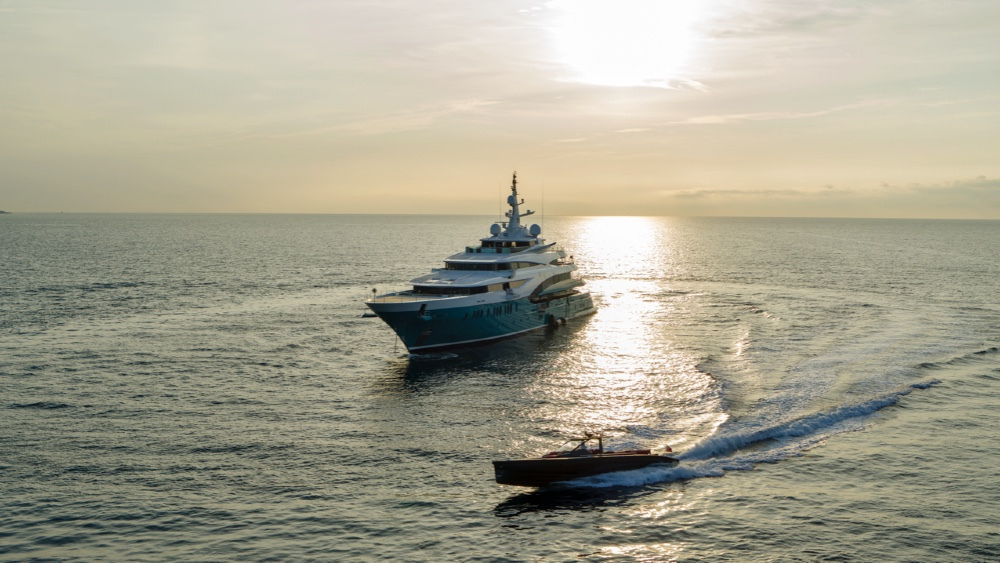 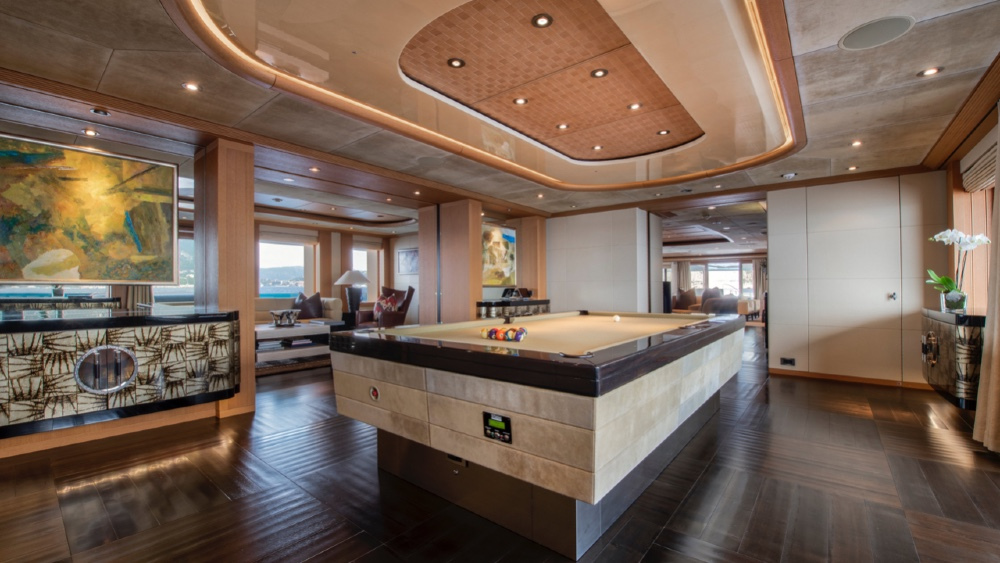 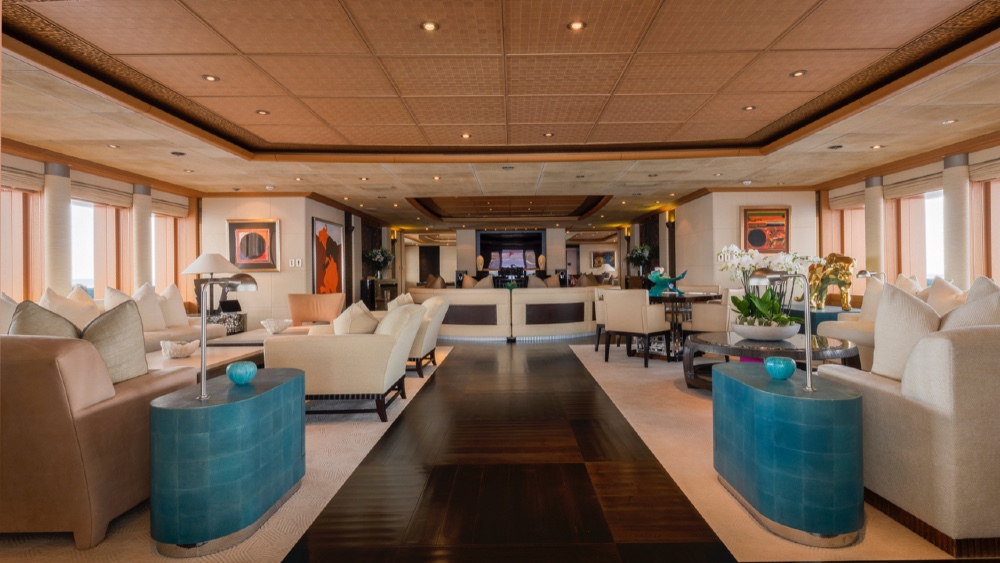