Last year, Jacob & Co. announced a long-term partnership with Bugatti, followed by the release of a “furious” supercar-inspired version of their Twin Turbo watch. Today, we’re happy to introduce the first ultra high-end, completely bespoke watch that Jacob & Co. has designed together with Bugatti.

The beating heart of this watch is the incredible JCAM37 movement, that’s made of 578 parts and 51 jewels and measures 41.7 by 36 mm. Functions of the watch include the traditional hour and minute display, a superb one-minute tourbillon that’s inclined at 30 degrees towards the user and best of all, an extraordinary W16 sapphire engine block, with on-demand animation that moves the pistons and crankshafts around.

Another interesting detail about the Bugatti Chiron Tourbillon is that the JCAM37 movement is suspended on all four corners, which means this timepiece joins the select ranks of watches with “floating” movements. The watch also displays a power reserve indicator at 8 o’clock and at 3 o’clock there’s an open worked barrel that shows the tension left in the barrel for the engine animation. 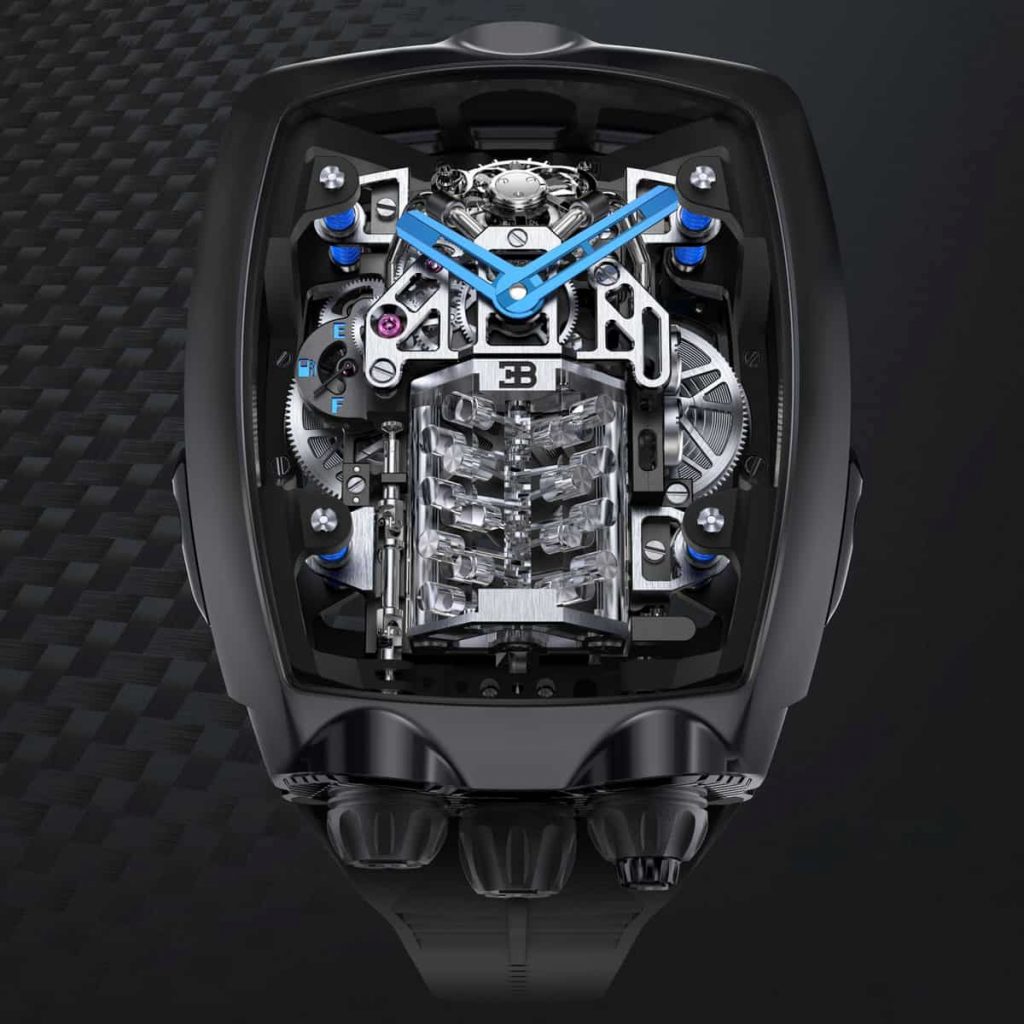 If you turn the watch around you’ll see three stems, one for setting the time (on the left), the central one helps you wind the movement (clockwise) and the animation (counter clockwise), while the right stem acts as a pusher to start the animation. The W16 show lasts about 20 seconds and the animation runs three times before you’ll have to rewind the mainspring dedicated to it again.

The miniature W16 automaton mechanism needs a lot of energy for its movement – for instance, if a barrel could power up a watch for 2 or 3 days, the same sized barrel allows a minute’s worth of operation for the W16 engine animation. But just like one minute in a Bugatti Chiron would feel like a lifetime for most of us, this animation will be equally appealing for all car enthusiasts and everyone else. 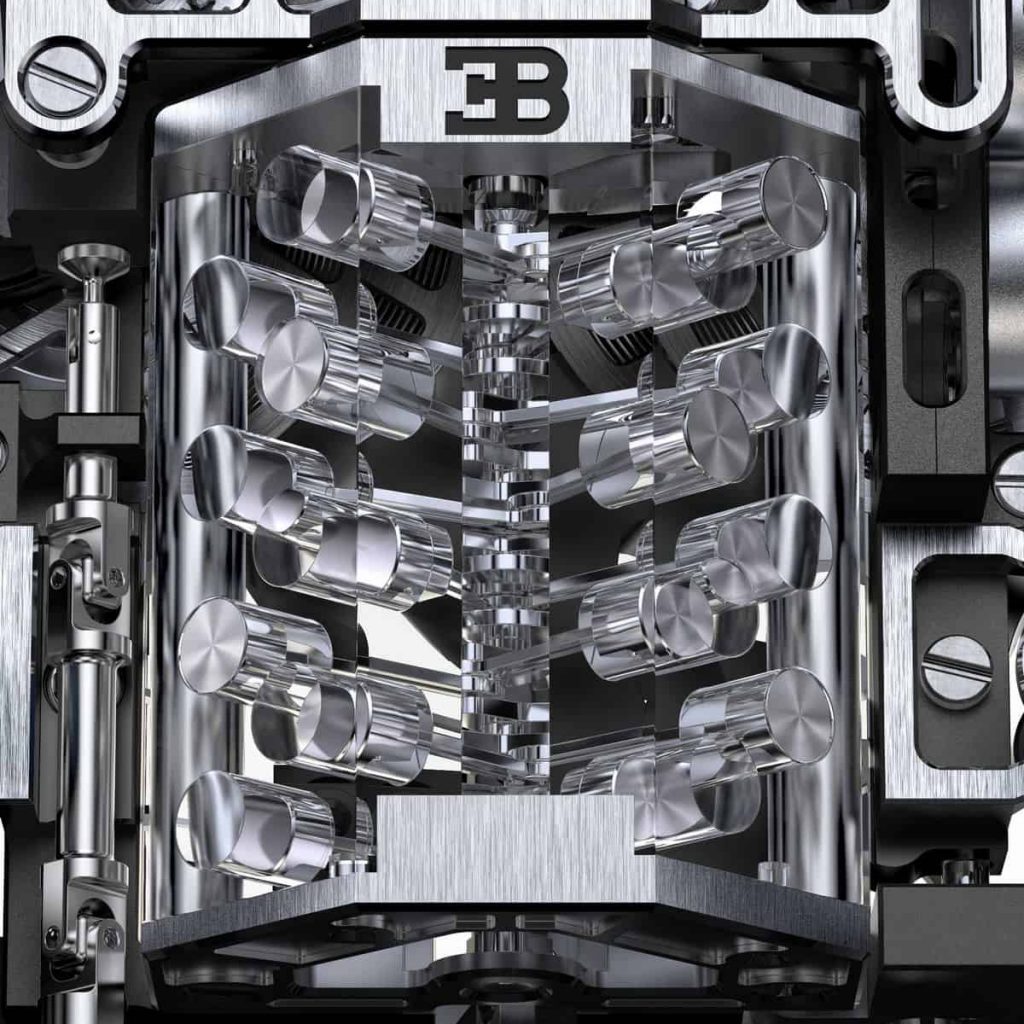 When the right stem on the back of the case is pressed, the automaton’s dedicated barrel starts to turn really fast, driving the crankshaft through a series of gears, which in turn move the 16 pistons up and down in perfect rhythm and geometry.

Jacob & Co. also says the flying tourbillon on this watch is brand new. It’s not as complicated as others, but since it’s installed at a 30-degree angle towards the wearer it offers a better view angle when you’re wearing the watch and it should deliver superior timekeeping performance.

The design of the case also mimics the front grille of the Bugatti Chiron, with the company’s signature horseshoe grille and a cool white and red Bugatti logo. The case itself is crafted from titanium with black DLC coating and it’s water resistant to 3 bars. Last but not least, we should talk about pricing and availability.

The Jacob & Co. Bugatti Chiron Tourbillon will be produced in super limited numbers and it costs $280.000. But if you already own a Chiron, that’s a small price to pay for a matching timepiece. 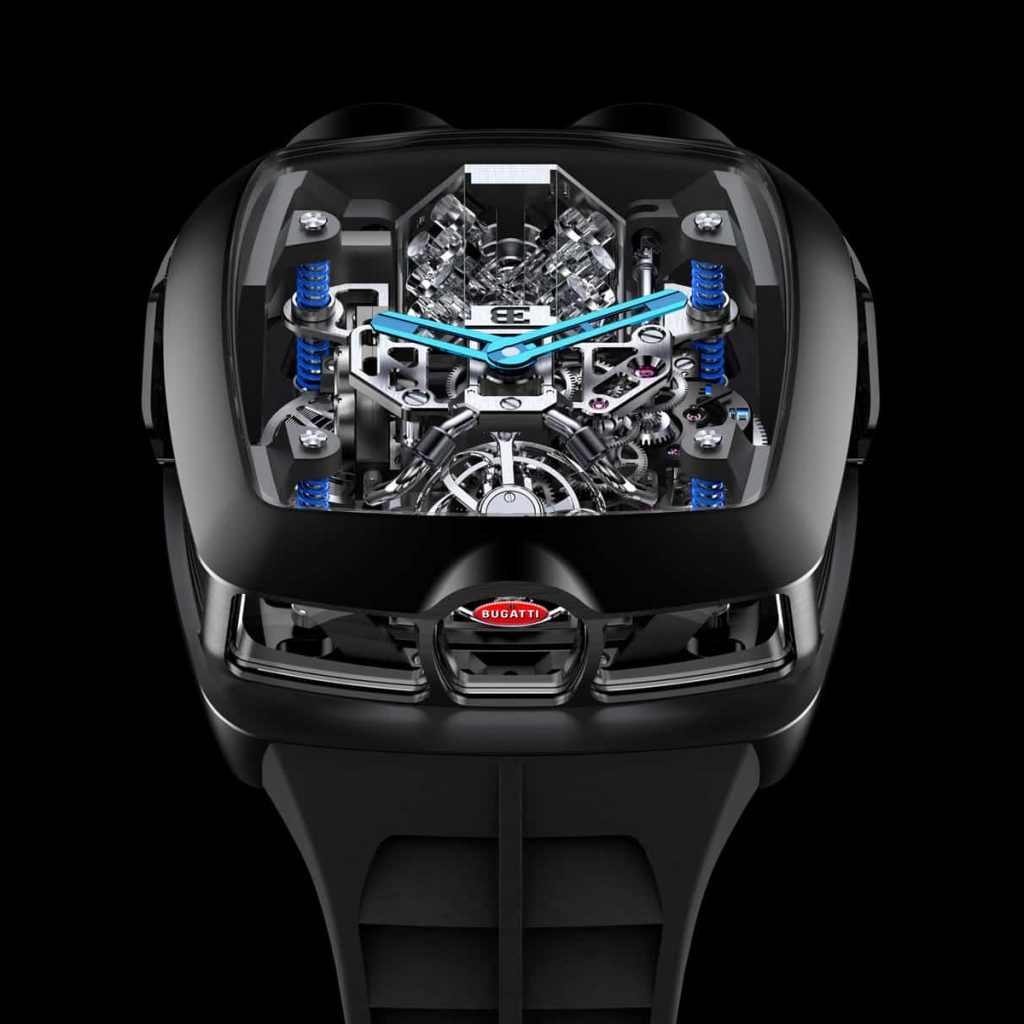 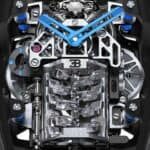 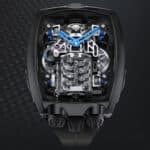 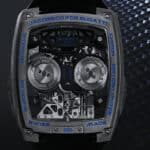 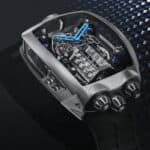 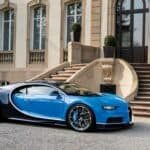 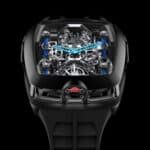 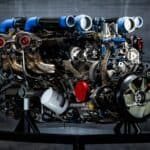 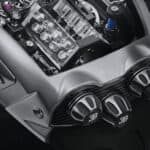 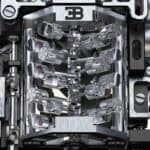