Marketing for the small, entrepreneurial business is difficult, even on the best day. Promotion during a pandemic it can be a minefield. Advertising during the apocalypse, now that is a real challenge.

Global crisis, both real and hyped, always bring out similar articles featuring what I call Apocalypse Entrepreneurs, those that sell survival goods, apocalyptic themed art or self-preservation training & services that can be put to use when the sky is falling.

These entrepreneurs can range from firms offering custom built backyard bunkers or access to space within luxury, fully stocked and well-appointed apocalypse shelters to firms that offer pre-assembled emergency kits and go bags, equipped with everything from hand sanitizer to gold bars for post economic collapse bartering. Lesser highlighted yet still in the niche are artists and film makers who produce paintings, illustrations and films representing, perhaps even celebrating, apocalyptic themes.

The articles usually highlight these unique entrepreneurs framed in a deriding fashion as opportunistic fear merchants or tell tales of billionaires running off to luxury shelters leaving the rest of us to fend for ourselves with the barren, virus strewn, nuclear fallout, contaminated, zombie infested wasteland.

But the truth is these innovative, creative and savvy entrepreneurs have cornered a niche, usually driven by personal passion, and are due the accolades they deserve. They are no more hoping for a disaster than AFLAC hoping you “get hurt and can’t work”, Coppertone rooting for sunburns or Kidd fire- alarms hoping for a house fire.

To set the parameters, I am not referring to the true opportunist, ambulance chasing types that exploit a crisis by hoarding goods, price gouging on essentials and transforming themselves as disaster response professionals 24 hours after the alarms have sounded or the first contagion has been reported. Apocalypse Entrepreneurs are merchants, artists and consultants who were offering counter-calamity capabilities years before the disaster du jour and will be still in the industry once the curve has flattened and the public has moved on from doom-scrolling daily infection rates and staring wide eyed at their phones, scaring themselves at midnight by surfing for COVID content as if it is the next Stephen King novel.

These entrepreneurs fill a demand and are as varied as any other business track and include artists, authors, philanthropists, crafter, builders and pitchmen While the apocalypse preparedness track has remained relatively narrow, the customer base has expanded exponentially. No longer is it the realm of the prepper and survivalist, usually framed as a fifty-year-old, bearded white male, right wing conspiracy theorist. To believe the modern-day prepper falls into a specific political persuasion would be to expose one’s own bias. Today’s clientele includes tech billionaires, celebrities and social media influencers.

Even after the world has moved on from COVID19, the Apocalypse Entrepreneurs remain focused on their chosen path and will be thinking about the worst of times even on the sunniest of days. This does not make them pessimists. Bill Gates and Barack Obama both talk frequently about rising sea levels, yet each recently purchased waterside homes priced in the tens of millions of dollars. Talking about catastrophe does not mean you hope, or even anticipate, it truly occurring. Most of us in this field understand that when we speak about pandemics, mass casualty, global warfare or electromagnetic pulse taking out the power grid, we are talking about the most catastrophic events that could possibly occur, but also the least likely events to occur. There are many day to day threats where proper apocalypse prep could come in handy, such as wildland fire or seasonal flood causing you to flee your home with a go-bag, active shooter scenario where a bullet proof backpack or vest could come be a life saver or even a tornado where a small, backyard security bunker would be essential.

Yet apocalypse entrepreneurs are often singled out as targets of derision. Scorn is directed at a tech titan buying an underground luxury shelter but not at the celebrity who purchased an extravagant mountaintop chalet. Trolls blast the youth posting a “how to” guide on preparing a “bug-out bag” but not at a youth showing how to build glitter filled slime. I never understood the angst of those obsessed with those who prepare, and the media outlets, both social and traditional, who paint both the preparedness vendor and client with the wrong brush.

In my book Business is Dead, Resurrecting Entrepreneurship, I highlight not only the mainstream apocalypse focused entrepreneurs, such as Terra Vivos and their luxury and mid-market survival bunkers, but also artists and crafters who create a painted vision of the wasteland, crafters who design road warrior type outfits and weapons and even bakers who whip up doomsday themed cakes and cookies in their kitchens. These are just entrepreneurs anticipate the unforeseeable, plan for the impossible, have identified a market and are there to support you for before the next inevitable crisis.

When the current COVID-19 outbreak really took hold on American soil, when lockdowns and stay at home orders began rolling out, I spoke with some people in this business track and there was a vigorous debate and differing opinions on how to approach the market. We agreed this was not the time for “I told you so” type messaging, but how do get your message out there to at least imply “See, I told you so!”? Some of those I spoke with felt this was not a time for self-promotion, this was a time to implement the subject matter expertise that this industry possesses to help in any way possible. There should be a donation of products and services from this industry, and the rewards of that altruism will be repaid through future business gained. That is the “pay it forward” mantra.

Others felt now was the time to remind the public of this industries prior warnings and current offerings, as what was once dismissed as ridiculous and unnecessary is now as sought after yet as hard to find as a pallet of toilet paper. Apocalypse entrepreneurs were in this business the month before the first fever or cough was detected on American soil and they will be in this business when America’s attention changes from new infection numbers in May to political poll numbers in November. So why not use this crisis as the opportunity to remind everyone they were there. After all, there is no set buying season or fiscal year for the apocalypse entrepreneur. They are not much different than the retailer who purchases sunblock, shorts and floppy hats in the winter at low prices so that they are prepared to open up their stores in June when the sun will shine, the heat will rise and the dollars will flow, at least until late August. For the Apocalypse Entrepreneur, the market could spike tomorrow, next year or never. It is always a best guess, and for those with high end, end of the world goods, it is an investment gamble. So to miss this opportunity would be like a retailer closing on Black Friday.

My issue with the first approach, highlighting goodness over greed, is that most people have a very short memory. Having lived through many crises, I have found that feelings of obligation and gratitude for those that did good during the crisis are just as fleeting as the anger and desire to hold accountable those that did bad. I have heard officials say “Now is not the time to assess blame, now is the time to join together and fight this (insert crisis here)” yet once the crisis is defeated, those same officials will be the ones to say “Now is not the time to look back and assess blame, now is the time to work together to prepare for the next virus” thus allowing those that were to blame to avoid any consequence.

The issue with the “I told you so” approach is that while it could lead to short term sales, it does not ingratiate you to the customer base, thus not building brand loyalty and you wont get that future sale when the world ends the next time, or the time after that. So, the answer to this question is much the same as the answer to the pandemic itself, moderation. Times of crisis are times for consultative sales approach, a time to establish yourself as a subject matter expert of Armageddon, but not stuffing it down people’s throats. People in quarantine are already stuffing too much down their throats, and people are gaining what has been coined the COVID-19-LBS.

The moderate approach would be to take this time to focus on the fundamentals of your brand, clean up that website messaging and ensure SEO optimization of keywords. Explore new promotional outlets beyond what you have assumed was your key demographic, grow your network, hold informational, yet not fearful, webinars. You know all the marketing stalwarts and I do not need to repeat them here. There are many marketing books out there, pick one that looks nice in the Zoom background as you broadcast from your fallout shelter. And if you have not previously thought of this entrepreneurial track, and feel that it is something you want to explore but are discouraged by all the good news coming out about flattening the infection curve and loosening lock downs, cheer up, there is always another bus coming that will be sure to hit us. Start prepping now for your future Apocalypse Entrepreneurship opportunity. I would wish you luck, but that is the last thing you will need.

Neil A. Cohen is an M.B.A, who supports business development and corporate growth for a defense firm with a focus and expertise in the areas of disaster preparedness, continuity of operations, emergency management, corporate resiliency and counter WMD proliferation. He serves on the board of directors of a biotech firm as well as a national association focused on chemical, biological, nuclear defense. Neil is also the author of multiple books including fictional pandemic trilogy Exit Zero, Nuke Jersey and Zombie Democracy. He latest release, Business is Dead, Resurrecting Entrepreneurship highlights Fantrepreneurs and apocalypse entrepreneurs who were inspired to launch their ventures with apocalyptic themes. https://BusinessIsDead.com and http://ApocalypseEntrepreneur.com 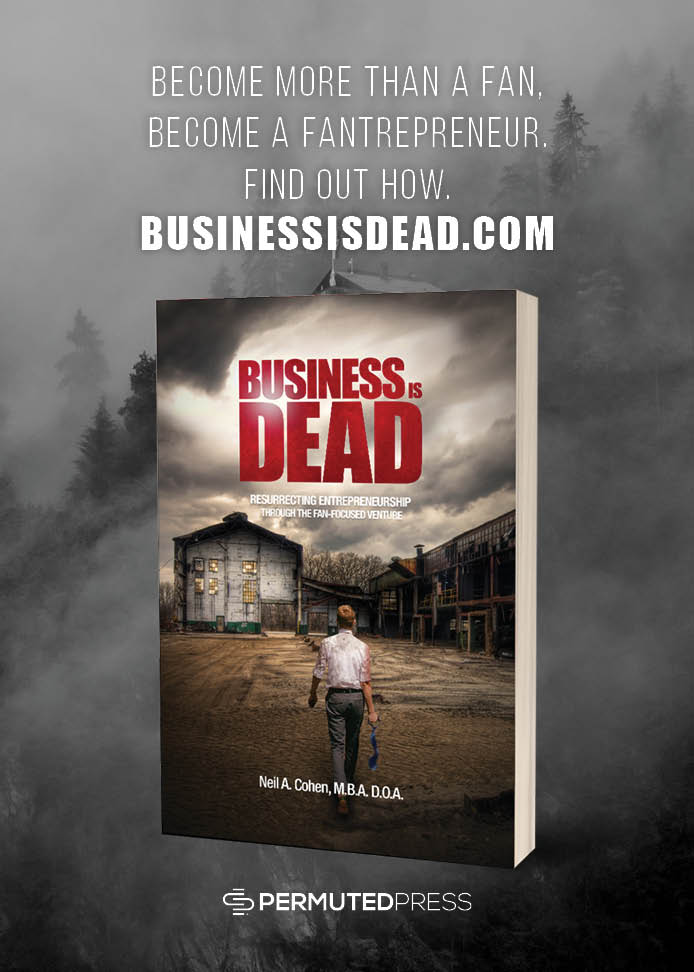 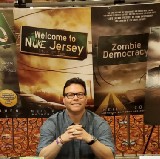 Written By
administrator
More from administrator
This year, the most desirable ring of the moment does not have...
Read More

0 replies on “The Apocalypse Entrepreneur”