Dirty sneakers at a temple of fine art?

That, of course, isn’t the whole story. The shoes in question here don’t belong to some Joe Schmo, but the iconic Michael Jordan, who—long before Kanye—turned his fame into a shoe line with Nike that practically prints money. Titled Original Air, the sale is a partnership between the prestigious auction house and the sneaker resale store Stadium Goods. Together they’re offering up 11 pairs from Jordan’s career—only three lots have been revealed so far, with the full catalog slated for release on July 23rd.

But Ben Jacobs, Stadium Goods’ brand director, tells us: “There is a mixture of game-worn, signed and mint condition items. Every lot is game-worn by Jordan, or is a player exclusive pair that was produced solely for his use, or both.” The online-only sale will be open for bidding from July 30th to August 13th. 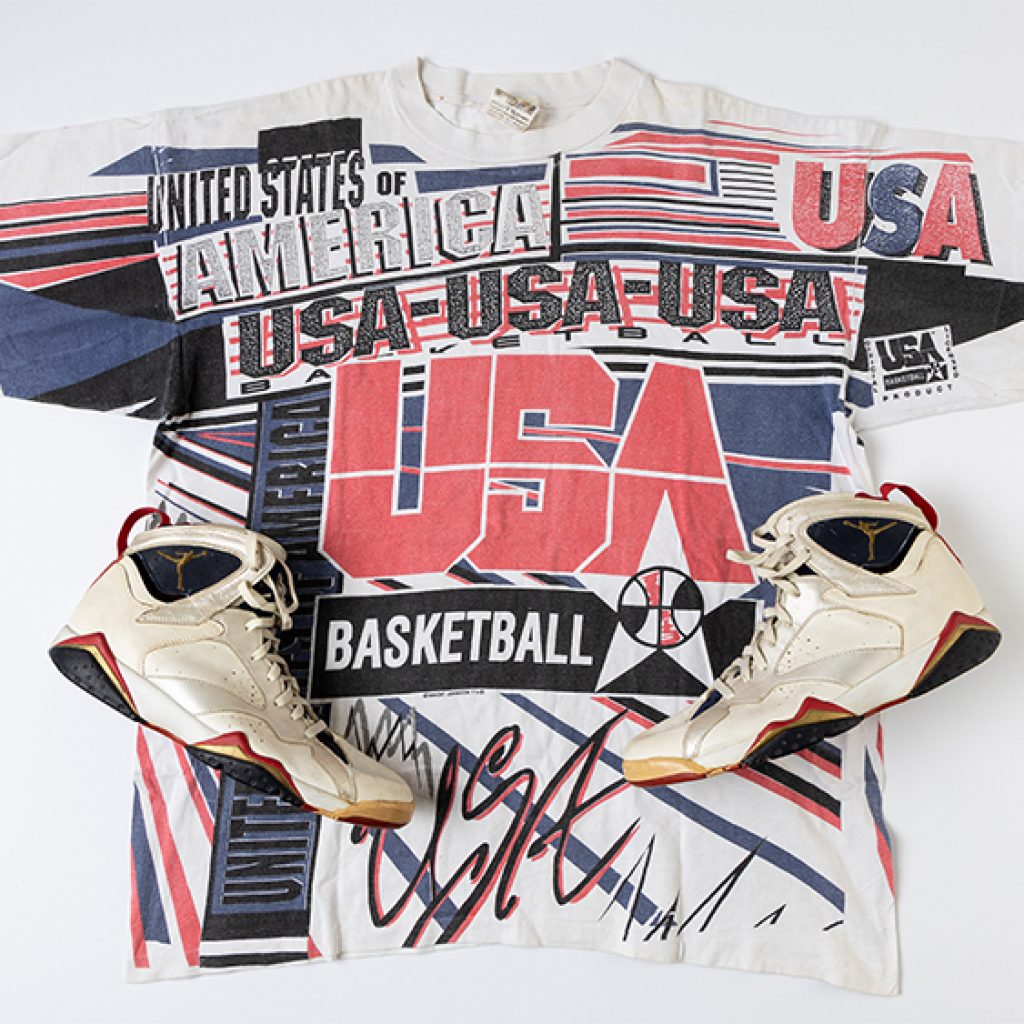 Lot 6 includes a pair of Air Jordan 7’s and a Magic Johnson T-shirt, both gifted to a Spanish hotel receptionist when the dream team stayed in Barcelona.

Thanks to the ESPN documentary The Last Dance, Jordan’s basketball career and thorny personality have been summoned back to the fore of late. As have his shoes: In May, a pair of Jordan’s autographed, game-worn kicks fetched $560,000 at Sotheby’s. When all is said and done, his on-court legacy will have to battle it out with that of the Nike Air Jordan franchise, one so tremendously culture-defining that it continues to be the foundation on which modern sneaker culture is built. Think that’s an exaggeration? Just ask the masterminds at Dior (namely its men’s creative director Kim Jones) who released an Air Jordan collaboration just last month—originally sold for around $2,000, the collaboration is now easily fetching tens-of-thousands on the secondary market.

So why do art institutions like Sotheby’s and Christie’s, which typically traffic in Bottero and Manet and, yes, maybe even a Duchamp urinal, want to sully their rarefied hands with some dirty, old shoes—even if they do have exceptional provenance? Well, time moves forward and, with it, our notions of luxury and collectability. Around 20 years ago, scrappy streetwear brands popularized the idea of the ‘the drop’: releasing small quantities of product on short notice, selling out, and then moving on. This format has given, say, a factory-made graphic T-shirt the patina of a limited-edition print. Savvy and exploitative? Sure—but isn’t a Koons balloon doggy, in its way? 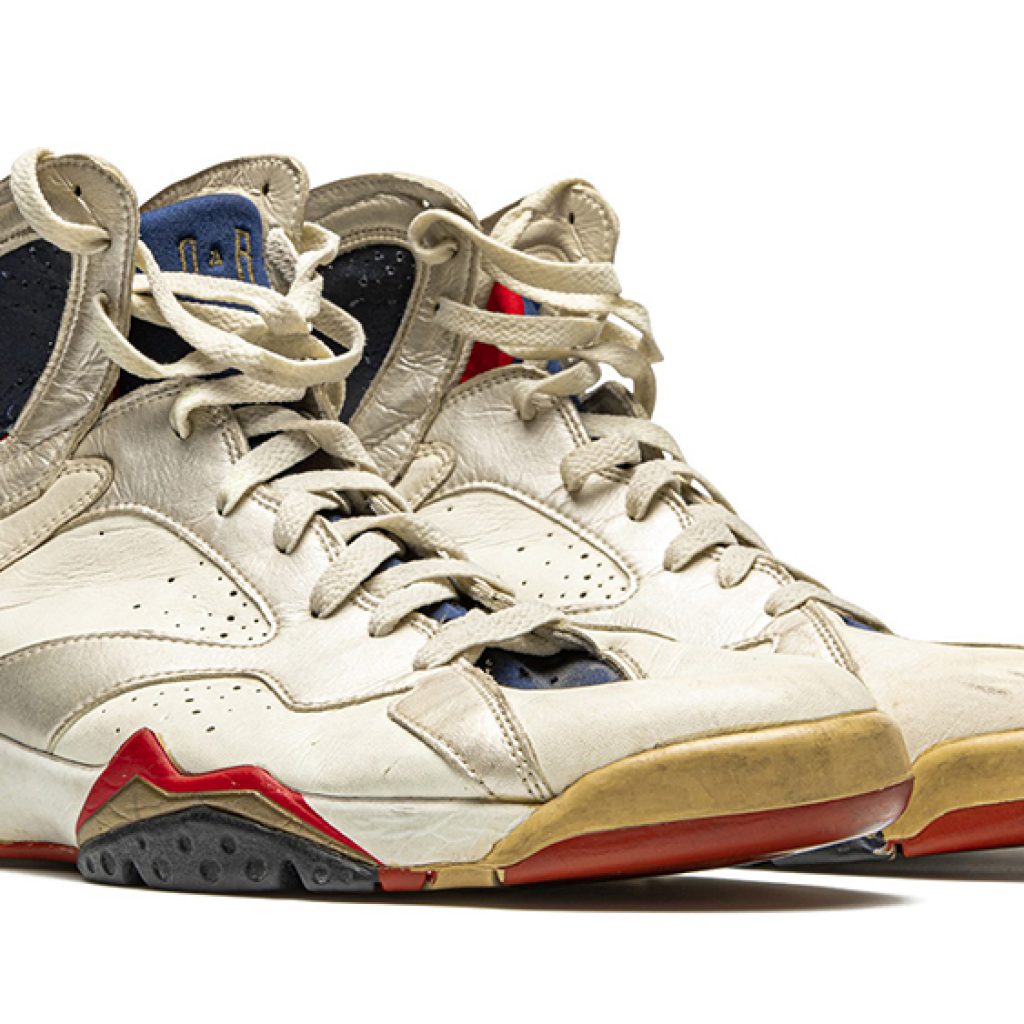 The Air Jordan 7 “Olympic” sneakers were worn in a 1992 game against Croatia.

And then there’s the fact that old rich people like art and young rich people like…clothes. Doing it for the ’Gram, amirite? “What’s exciting is that this sale appeals to a cross-section of buyers,” says Caitlin Donovan, VP specialist for Christie’s Luxury. “The term ‘traditional collector’ is not as applicable for this material, which I think speaks to the intermingling of collecting and consumer behavior today. From contemporary art collectors to buyers of high fashion, the legacy of Michael Jordan and Nike is interesting because it represents a new type of luxury—inclusive of all references from fine art to pop-culture and sports.”

As Jacobs, of Stadium Goods, notes, art and sneakers have already intersected outside of auction houses. It was only a matter of time before sneakers infiltrated fine art’s highest strata. “When you have renowned artists like KAWS and Takashi Murakami designing sneaker collaborations, that certainly helps. They blur the line between fashion and art.”

Donovan touches on the fact that the internet has helped flatten traditional hierarchies and boundaries—what is art, what is expensive, what is worthy of being considered an important cultural artifact—and that Christie’s isn’t in the business of judging such things. They’re simply in the business of selling. 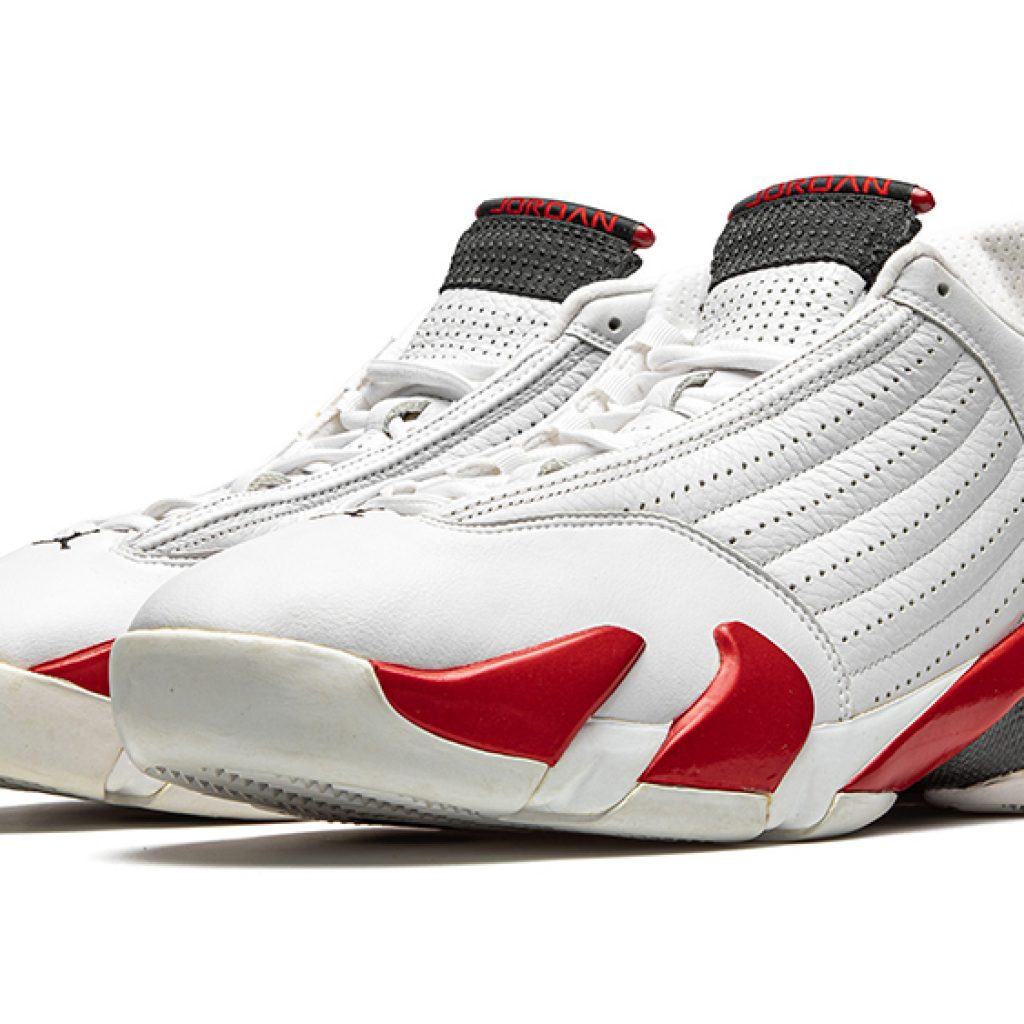 Lot 11 is a pair of “Chicago” Air Jordan 14 sneakers that can be seen in The Last Dance.

So here we are, with Lot 1, the Air Ship, a pair of high-tops worn during a 1984 game that is estimated to go for somewhere between $350K and $550K, a gob-smacking price but perhaps not unreasonable given the results of Sotheby’s sale just two months ago. The shoes, interestingly, are different sizes—the left is 13.5 and the right 13. On the lower end, there’s the mid-top Air Jordan 14 “Chicago,” which will only set you back a paltry $8K—a steal! (A portion of profits are earmarked for the NAACP Legal Defense Fund, so, despite the heady prices, there is some philanthropic good to come out of the sale).

Is art fashion? Is fashion art? A question that will continue to vex, no doubt. But for some lucky plutocrat or tech kabillionaire, the real question is: Where does one display a six-figure pair of dirty, old shoes?

Written By
Sky
More from Sky
Looking good takes time. That’s why you should wake up early to...
Read More